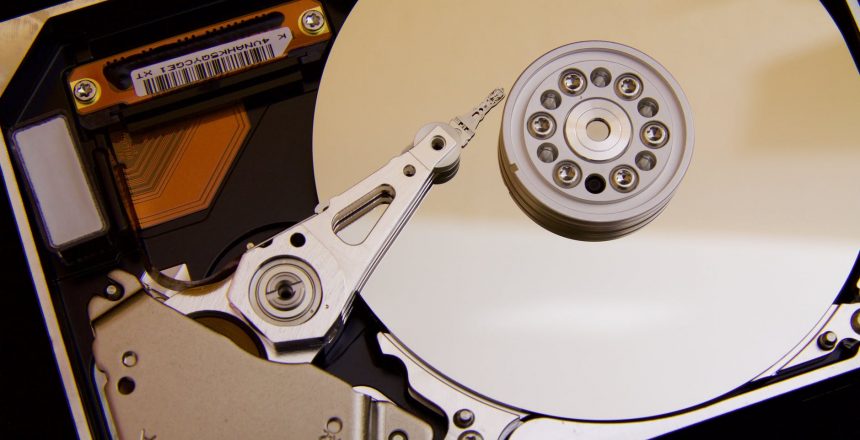 I was dismantling an old system and thought it would be a good idea to explain the history of these common devices we use to store all our data on, the common hard drive. In the beginning, they weren’t all that common.

In 1878, Oberlin Smith from Bridgeton, New Jersey drew up a caveat (temporary patent) in the US Patent office for his Electric Phonograph or Recording Telephone that recorded magnetically to silk thread wrapped around a drum.

In 1898, Danish engineer Valdemar Poulsen improved the design and patented what he called the Telegraphone which used magnetic wire (pictured above) Poulsen also created magnetic tape and magnetic disk recordings.

In 1923, Gustav Tauschek, a Viennese engineer created the magnetic drum, a way to record tabulated data in a series of 1’s and 0’s but it was never mass produced. IBM bought out the company and gave Tauschek a 5 year contract and Tauschek sold 169 of his patents to IBM.

Magnetic drum storage was popular until the mid 1950s.

In 1927, Dr. Fritz Pfleumer improved the idea of the magnetic wire and magnetic tape recorder to use plastic instead of steel for the tape, which made the tapes considerably more efficient.

When Poulsen’s patent for magnetic wire and magnetic tape expired in 1918, the designs were improved by Dr. Curt Stille, who later formed the Echophone company and through a contract with Ferdinand Schuchard AG, and the young engineer Semi Joseph Begun created the Dailygraph, the first cassette recorder.

In 1930, AEG started development of the Magnetophone and Pfleumer allowed them to use his invention in 1932. That same year, AEG signed a collaboration deal with BASF and in 1935 at the Radio fair, the Magnetophone and their magnetic tape (cellulose acetate coated in iron oxide) was demonstrated.

The following year, Pfleumer’s patent was cancelled, which made the Poulsen the inventor of all magnetic recordings.

It was in 1950 when magnetic tape was first used for data however, with the creation of the Uniservo for the UNIVAC.

Back in the mid 1950s, in IBM’s San Jose laboratory, the engineers created the first hard drive. It consisted of 52 platters (magnetic plates) that measured 2ft each, this gave 100 recordable surfaces each comprising of 100 tracks and could store 5 million 6-bit characters (equivalent to 3.75MB)

The IBM 350 weighed in at about 1 ton and had to be moved by forklift truck. It was discontinued in 1969.

IBM created the 3340 “Winchester” drive after the Winchester 30-30 rifle, as the drive stored 30MB on each platter. The platter module was removable enabling the storage to be relocated from machine to machine. IBM discontinued the 3340 in 1984, but the name “Winchester” drive was popular into the mid 1990s.

In 1983, Rodime released the first 3.5″ hard drive and IBM would release their first PC with an internal hard drive called the PC/XT.

In 1984, IBM released their AT (Advanced Technology) and Western Digital created a controller card for it called the AT Attachment card (Parallel ATA or PATA comes from this card)

In 1985, a consortium of Control Data, Compaq and Western Digital create a new standard called Intelligent Drive Electronics (IDE) later known as Integrated Drive Electronics – The hard drive has most of the controller built into the drive.

1986 saw the first SCSI spec released and Apple’s Mac Plus was one of the first to use it.

The 1990s introduced the move away from the older hard drive connections to IDE and beyond.

In 1990, Western Digital introduced their 3.5″ IDE drive and then 2 years later, Seagate released their 2.5″ hard drive.

The smaller 2.5″ hard drive allowed manufacturers to create laptops since the new drive needed less power to operate, and could solely operate on 5v.

In 1994, Western Digital created Enhanced IDE which allowed optical and tape drives to be connected to the same interface. The interface was limited to 33MB/s, then later doubled to 66MB/s then to 100MB/s by the end of the decade.

The SATA standard originally offered 1.5Gb/s or 150MB/s, but later with the release of SATA 2, this speed was doubled. By 2009, the speed would be doubled to 6G/s or 600MB/s for the latest SSD technology.

For the CeBIT show in 2009, OCZ revealed the first 1TB Solid State Drive

The 2010s were the era of the Solid State Drive. SSDs relied on the same interface from the late 2000s, which was designed to interpret the data into logical block locations on a hard drive (the controller on the drive would interpret this data into physical locations on the drive) but since SSDs don’t have moving parts, they could return the data between 5-10 times faster.

By 2013, however, there was a need for a better method of storing data faster, so NVMe standard was born. NVMe (Non Volatile Memory Express) connects directly to the motherboard of the computer, bypassing the controller, so the computer accesses the data around 35 times faster than a traditional hard drive.

Early NVMe drives were fitted using an Add in card (called AIC) which meant they could work in existing motherboards, however the BIOS had to support them in order to use them as a boot device.

Later NVMe drives are in M.2 (formerly called Next Generation Form Factor or NGFF) format that fit directly into the motherboard.

Without the need for a large hard drive, and with the removal of optical drives, the physical size of the computer could be reduced. For laptop manufacturers, the case could be considerably thinner and lighter because NVMe requires less chips; less power and less weight.

It seems that the 1800s was a time for great inventions, the ability to store binary states on a piece of wire, later to tape. The 1900s bringing us the ability to record audio; later into the data age to bring us the hard drives we use today.The 2000s bring in a different era, moving to faster storage technology using different methods. Where does this century lead us?