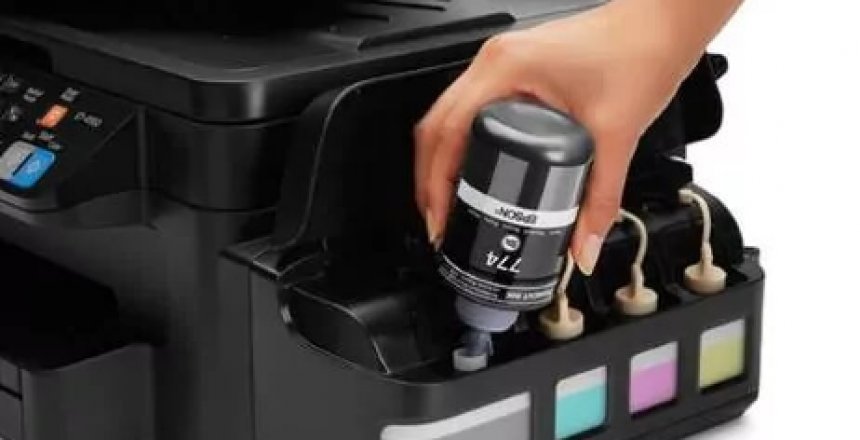 A few years ago, I saw Epson printers that had their cartridges adapted to take ink from a separate ink bottle. It got around the problem of expensive ink cartridges. Epson realised the potential and created their own EcoTank range of printers.

Ink jet printers work on a simple process of tiny nozzles that release droplets of ink onto the paper through a print head. There are really two kinds of inkjet depending on how they work:

With a thermal inkjet printer, the resistors heat the ink which causes a reaction that draws the ink through the cartridge and into the integrated print head. The advantage is that the head technology is cheap but more prone to fouling if the printer is left in an idle state for too long. You buy a new cartridge every time, which comes with a new print head.

With piezoelectric printing, the print head does the printing which is a more expensive part and simply draws the ink into the reservoir using suction. This means that the ink cartridges are cheaper to produce because they just contain ink, but if the cartridges are removed from the printer, the ink in the reservoir will dry out and the print head will foul. Often with the need to replace the whole printer.

Ink cartridges are also a way for manufacturers to print money, they sell expensive ink cartridges with a tiny amount of ink in them and know the customer has to buy their cartridges for their printers.

There is a “compatible” market for some printers but some manufacturers made printers with a chip in the print cartridge that tells the printer whether the cartridge is a genuine cartridge or not, and refuse to print.

A new way to tie customers in is the use of a unique code in the chip that ties to a subscription, so if you cancel your subscription, the printer stops working with those cartridges.

Since Epson, Canon and Brother printers use the piezoelectric printing method, it was easy to adapt cartridges to work with external ink bottles through something called CISS or Continuous Ink Supply System.

CISS uses an adapter that replaces the ink cartridges with an adapter and pipes that lead out through the casing to an external set of ink tanks. You can easily see the levels of these tanks and fill them up as they run down.

Epson noticed that companies were selling CISS for their printers so to make it easier for their customers, they introduced EcoTank, they basically built the tanks into the printer.

HP have been selling both kinds of inkjet printers for some time and have now introduced SmartTank as their built in tank printer, however they are priced £100 more.

Canon printers are available with edible inks, which can be printed onto rice paper. With a cricut machine, these sheets of rice paper can then be cut out to form any shape.

Epson, Ricoh and Sawgrass printers can be used with CISS for sublimation inks, these are commonly used for printing onto transfer paper to be bonded to garments and merchandise.