The life and death of Flash 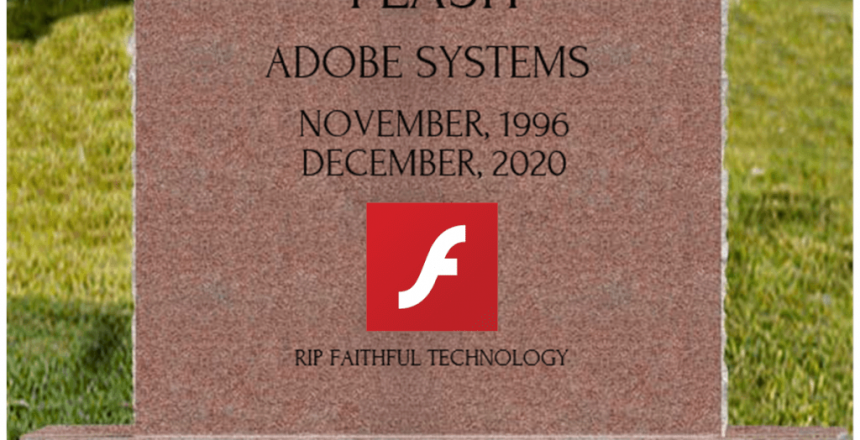 Who’d have thought it, that back in 1995 that there was no way to listen to audio or watch video over the Internet? You could download some audio or a video off a website and watch it on your computer, but you couldn’t stream video. Two companies changed that.

In April 1995, Real Networks released RealAudio, a proprietary audio format that offered the ability to stream audio to a plugin called the RealAudio player.

You would take your music and using their Real Producer to convert it to their format and then anyone who wanted to listen to it could download the player and go from there.

In 1997, they introduced the RealVideo format, so you could do the same with video.

The combination was also called RealMedia, but the latest version of Real Producer no longer creates the RealMedia format.

The BBC were heavy users of RealAudio until 2011.

FutureWave was a company that made SmartSketch in 1993, a drawing package for pen devices running PenPoint OS, but when that failed, they ported it to Windows and Mac.

As the Internet became popular, they realised their vector animation tool could challenge Macromedia’s Shockwave system. In 1995, they modified their program to include frame-by-frame animation and called it FutureSplash and tried to sell it to Adobe, but they refused.

In 1992, a merger between Authorware (a graphical programming system) and Macromind-Paracomp (the creators of Macromind Director) created Macromedia.

Macromedia made a product they called Director, this was authoring software for creating interactive as well as kiosks. Authorware was used in learning environments. Macromedia made a plugin for Director called Shockwave that allowed anything created in Director to be displayed on a web browser.

In 1996, Macromedia acquired FutureWave software that created FutureSplash Animator, and animation tool designed for pen inputs. The plugin was considerably small to be installed into web browsers, so Macromedia renamed “Splash” to Flash, and Macromedia Flash was born.

Adobe acquired Macromedia in 2005, and began to expand the capabilities of flash. They introduced Flash Video and 3D support.

In 2008, Adobe decided to create the Open Screen Project where they abolished the licencing fees for Flash and open it up for developers to use in their products.

Since the primary use of Flash products were for a time when most people used dial-up modems and the advantage of Flash being quick to download to give an immersive experience had waned because the Internet had got faster, and the problem with the immersive experience meant that the user was trapped in their environment.

The mid 2000s saw the introduction of Cascading Style Sheets and Flash was driven by the video sites that were the precursor to YouTube.

However, towards the end of the 2000s, the age of the smart phone appeared on the scene, gone was the simple web pages and it came browsers that could use the full features of the Internet. In 2010, Steve Jobs wrote a letter to Adobe saying they would not include Flash in any of their mobile devices citing the fact it would drain their batteries, Adobe knew that it was the beginning of the end for Flash.

In 2015, Adobe announced that Flash developers should switch to Adobe Animate and that all support for Flash would end in 2020.

Google Chrome 76 and Mozilla Firefox 85 were written with Flash disabled, but the user could change this behaviour so that Flash could be turned on for a site basis, with banners saying that Flash support would be dropped entirely in December.

In the 20H2 update, Microsoft hid the message in Edge legacy and Internet Explorer that said there was a need for a Security update for Flash, and this month will release a patch disabling Flash for both legacy browsers.

An optional update is available for removing Adobe Flash from Windows devices in their update catalogue, however, once this update is installed, Adobe Flash can never be installed in the future.